A B&W film from 1965 makes it look like the 1860s, but there are some interesting floats including the Department of Science lunar module. I only came to Melbourne in 1967 and don’t remember being taken to the Moomba parades (though I can remember collecting plastic lunar modules out of cornflakes packets). Also featured in the clip are Melbourne University students on their “Banned Wagon”, opposing censorship of Mary McCarthy’s The Group, Nabakov’s Lolita and the like. This was in a long tradition pre-dating Moomba of university students conducting their “annual revels” at least from the 1890s. Melbourne University students regularly marched by torchlight from Carlton to the city in fancy dress on commencement of theatre or amusement nights at the People’s Palace, the Bijou Theatre, Princess Theatre or Princes Court. 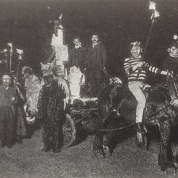 Things of yore from the 1950s and 1960s — tobacco ads, standing on verandahs and rooftops to get a better view, women wearing white gloves. But the past looks quite different in colour don’t you think? The City of Melbourne Arts + Culture flickr stream has some great shots (a pink touch of India on the 1961 Myer float), as does the SLV catalogue.

This entry was posted on March 9, 2014 by AM in Home, Melbourne and tagged censorship, Melbourne, Moomba, processions.