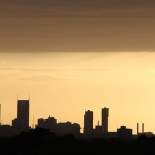 Cherrapunji is a couple of hours drive south from Shillong. One of the wettest places on earth, it’s perched on a plateau at the edge of the Khasi Hills and overlooking the plains of Bangladesh. The name Cherrapunji derived from a British rendition (‘Churra’) of the local name Sohra. While the Welsh missionaries in the early 1840s recorded versions of the native name as ‘Sauhrah’ and ‘Sorra’, historian David Syiemlieh has suggested that the word Sohra may not indeed have a Khasi root. 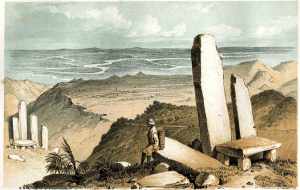 ‘The table-land and station of Churra, with the jheels, course of the Soormah River, and Tipperah Hills in the extreme distance, looking South’ in J.D. Hooker, Himalayan journals (1854), volume 2, Figure X, p. 277.

A variety of early British spellings (‘Chirra’, ‘Cherrapoongee’) were slowly regularised by the mid nineteenth century, part of the way in which the British constructed and controlled India through geography and naming. Whatever the case, the locals have long called it Sohra, and the name was officially changed from Cherrapunji to Sohra in 2007. 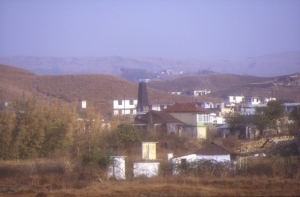 My first visit  was in February 2004, and I stayed for a night at the Government Circuit House, a deserted hostelry usually reserved for ‘VVIPs’. I spent a cold night there with minimal facilities, but woke to a beautiful clear day and the sounds of the frogs calling from the nearby Pung Mem Jones, or ‘Mrs Jones’s lake’, where one of the early missionary wives apparently used to come and do her washing. 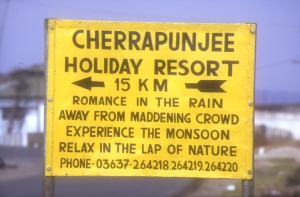 Cherrapunji was where the Welsh established their missionary activities in 1841. The new church at Nongsawlia was built in 1898 after the original one was destroyed by the great earthquake the year before. My original guides at Cherra were the indomitable Reverend Pritchard Basaiawmoit (activist, ecologist, headman), church elder Willis Knight, and historian Amena Passah. Across the road from the church are the British burial grounds atop two grassy hillocks.

Here from the 1830s civilians and missionaries were laid to rest, including Ann Jane Jones, Thomas Jones’s first wife. The 1897 earthquake drove many of the memorial stones into the loose sand and cast others at various angles.

The persistent annual rains have cleaned many of the inscriptions to a smooth and indecipherable slate. The easiest way to clear the long grass is obviously just to set fire to it, recalling a traditional practice of the Khasis at Cherra of seasonally firing the lush pasture on the plateau.

In 2004 there were still remnant structures from the period before the British headquarters were moved to Shillong in the 1860s, though I couldn’t find some of them again on this visit. 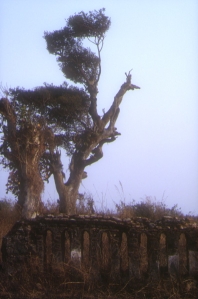 The memorial to British Political Agent David Scott still sits behind its iron fence, and two local schoolgirls were bemused that the occasional foreigner should want to visit this odd structure. 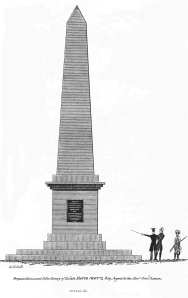 ‘Proposed monument to the memory of the late David Scott, Esq. Agent to the Govr Genl Assam’, 1832.

Scott died in 1831, uttering the words ‘I wish you, gentlemen, to bear witness to Government, that I am no longer able to conduct the affairs of the country’. According to contemporary accounts, he was buried on one of the hillocks, though I have been told that he is in fact buried at the memorial itself. During the 1897 earthquake the two lofty gate pillars at the Inglis bungalow at Cherrapunji crumbled to the ground, and the upper part of the massive Scott memorial also cracked and fell.

The monument is now protected under the Ancient Monuments and Archaeological Sites and Remains Act. I remember standing in front of the inscription in 2004 while Pritchard alternately read the glowing eulogy, and interpolated his own reflections:

By his demise the government has been deprived of a most zealous, able and intelligent servant, whose loss it deeply laments, while his name will long be held in grateful remembrance and veneration by the native population, [Come ON!!! Absolutely wrong!!!] to whom he was justly endeared by his impartial dispensation of justice.

Right at the end of the plateau is Kut Madan (literally, the edge of the flat). Here lived Harry Inglis, a local merchant who monopolised the lime and orange trade in the 1830s and 1840s. After his death, his widow Sophie installed her husband’s corpse in a glass coffin on the verandah, telling the Khasis ‘that he would rise from the dead and avenge himself on any person who wronged her’. Sophie’s logic played on the fear the Khasis still felt of Harry’s power, even in death. Under Harry’s agreements with the Khasis, his leases on the orange groves were good for his lifetime, which in Khasi translated as ‘for as long as he remained above the ground’.

In the 1860s Kut Madan became ‘Emma Ville’, the home of John Bird Shadwell (1819-1908), Assistant Commissioner of the Khasi and Jaintia Hills, and his wife Emma nee Brockway. In 2003 I came across a query on INDIA-L from Vivienne Loesch, who turned out to be a direct descendant. 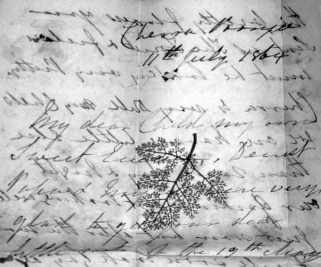 In 1862, four of the couple’s young children—Emma, St Clair, Flora and Howard—were sent to be educated in England in the care of their aunt Martha Brockway. Vivienne still had in her possession some Indian wooden toys that had been passed down to her from one of the Shadwell children who came back to live in England. More importantly, she also had a cache of letters written from Emma to her children.

Emma Shadwell’s private letters give a rare insight into the rhythms of social life on an isolated frontier station. In her letters, she was proud of the garden at Emma Ville, ‘our quiet little corner’. After his wife’s death, J.B. Shadwell married into the local Langstieh clan. Kut Madan is now a deserted and slightly eerie place, but to me it’s also an immensely moving site where these vectors of old empire meet in the ruins, the material mementoes, the memories, the family cemetery.

Walk through the overgrowth to the back edge of the property, and suddenly you emerge into a small clearing at the edge of the precipice and effectively right above the southern border of India and Bangladesh. A large flat rock gives the most incredible view of the mountains beyond and the valleys below. I understand how Emma was attached to this spot, however much she longed for England. This is a place of quietude and beauty that I often go to in my mind. 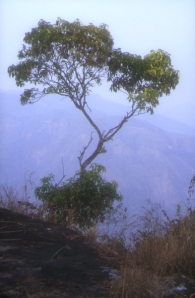 A lone tree that clung onto the edge of the rock in 2004 has gone, but the view is as awe-inspiring as ever. There is nobody else for miles around, nothing here but empire’s ruins, the soughing of the wind through the trees and the grasses, a falcon hovering on an updraught, the silver snake of the river below, the shape-shifting clouds forming and reforming around my ears like magic smoke, and the hazy indeterminacy of the world beyond. 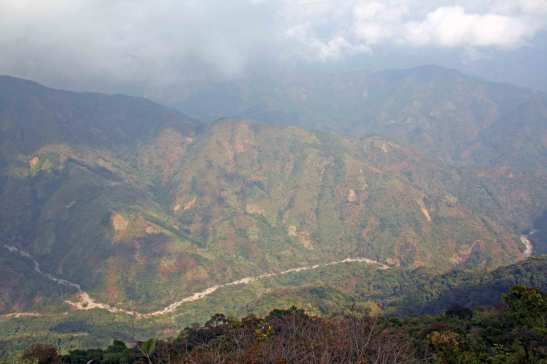 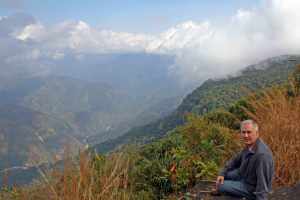